A postcard from Rotterdam 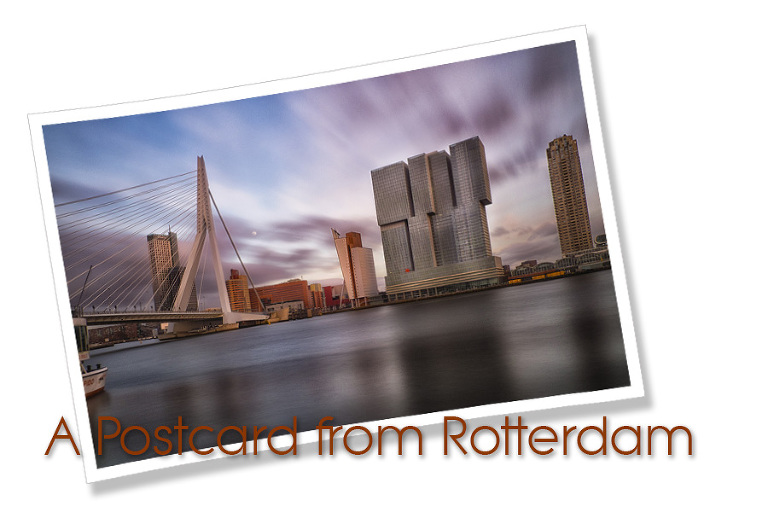 I nipped over to the Netherlands at Easter to have a few days of street photography Rotterdam style. This city, only a short drive from the Europort, is noted for its clean and modern architecture and I’ve been fancying going over there for a while now. Given the fact the Euro is pretty humble right now, it also made for a great opportunity to pick up some new gear at a rather sizeable discount compared to the UK :¬) So, as it was a family break, I left my trusted professional, large DSLR system at home and instead took only the small Fuji mirrorless system. Although the Fuji is a fine camera, the battery life left me a broken man! I took three fully charged batteries for around four days shooting and thought I wouldn’t take a charger as one of the days wouldn’t be a full day. Big mistake! I pounded the first battery into submission on day one and that wasn’t even a full day’s shooting! I know it was the long exposures of the Erasmus Bridge at dusk that hit it hard but but by the end of the second day, I’d hammered all three! The last day, Easter Sunday, was a beautiful sunny day and I managed three or four shots before the XT-1 finally died with an image count of around 590 over the three batteries. My Nikon D4 on 3x fully charged batteries would have done around 5-6000 images! I always learn the hard way. It’s because this is the first time I used the XT-1 in anger, rather than just using it on afternoon walks with the family.

I thought I’d string a few of the images together into a slideshow, most are from Rotterdam, some are from Delft and Utrecht.