Estonia and the big freeze

Just got back from Estonia where the trip results were the exact opposite of the fabulous three days I had in Greece a couple of weeks ago! The Greek trip resulted in over 5000 images in three days while Estonia resulted in around 20!! The reason for lack of images was the incredible freeze creeping across eastern Europe with daytime temperatures between -24dg to -36dg! These extreme temperatures caused many bird species to move out of the area, including our target species, the white-tailed sea eagle. We were due three days in a hide to photograph this magnificent bird but after two days we didn’t even catch a glimpse, so we decided to cut our losses and shoot some wintry landscapes on the final day. The trouble with eagles is that they are very wary meaning we had to be in the hide in the dark by 06:30 and couldn’t come out of the hide until it was virtually dark again at 17:00hrs. So, once you’ve committed to the hide, you’re in there for the duration and despite the weather being fantastically sunny, we just couldn’t make any images. Not even the ravens were coming to the carcass which is unusual, but given that the carcass was as hard as granite, who can blame them?!

Here are a few landscapes taken on the last day. Thanks to our man on the ground, Jan, for guiding us around that day. At least we got a few images to remind us of the intensely cold, but beautiful Estonian landscape and we did manage to catch up with a hawk owl, a new species for me and a very beautiful and enigmatic bird that I’ve long wanted to see. Check out me shooting in the snow, then look at the back of the camera seconds after I took the shoot and see the frost that has formed from my breath on the camera and tripod head, then look at the temperature guage in the car just moments later as we left :¬o And by the way, they are wolf tracks in the snow in case you’re wondering.

I am sure I will be back in Estonia before too long to make some really nice nature images :¬) 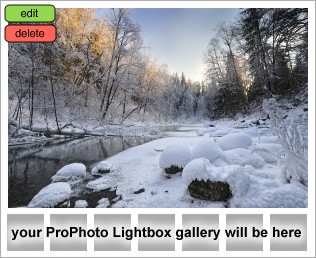