A Chinese Delegation at the Town Hall

Working in the town hall this morning on a commission from Wakefield Council to photograph a group of Chinese delegates over on a trip to meet with headteachers and staff from the Wakefield district. Group shots are more tricky than they first seem, I know that from wedding groups. There’s loads of problems associated with these shots, mainly that the light fall off over a big group is immense with the back row receiving around half the light of those at the front and taller folks can cast shadows over smaller folks and then there’s the problem of making sure everyone has their eyes open and is actually looking at the camera! I was offered the stairs just inside the town hall for the shots and the brief was to gather the Chinese delegates, the Lord Mayor and a group of local authority staff as they all arrived at 12:30 and to shoot them as quickly as possible with as little fuss as possible. So, I arrived in plenty of time to recce the place and set the lights up ahead of the shot and work out what I was going to do. I decided to go with a couple of speedlights high up and into silver refelctor brollies as brollies give a larger spread of light than softboxes. By setting the lights high up and quite a way back from the group I was hoping for a bigger and more even spread that would cover the group. As i knew the light fall off would be quite rapid, I anticipated that behind the group would appear black and have little detail, so I placed a speedlight on the half landing immediately behind where the group would stand, set at around 1/16th power, just to light the background. I also made a last minute decision to put a fourth speedlight behind me and angled upwards to light the ceiling above the group and also add just a touch of extra fill and I set this to around 1/8th power fitted with a diffuser to break up the light. A quick couple of test shots to ensure that the light was how I’d envisaged, then a case of waiting for the delegation to arrive.

At bang on 12:30 all the required delegates were in the foyer so I called order and arranged them on the first five rows of the stairs, ensuring the didn’t go beyond the big archway over the stairs to avoid anyone going into shadow. I wanted the Lord Mayor and the Chinese at the front but they seemed determined to stay with their allotted local authority figure so I just ran with it. True to the brief I was very quick and took less than a minute to pop off around seven shots, pausing only once to check the lighting. It’s always nerve jangling at a shoot like this as, just with weddings, you get one chance to get it right! In the end it turned out OK and I got the formal shot which has now been printed and mounted ready for presenting to the delegates before they return to China on Thursday. Although its hard to tell on this small image, the Lord Mayor’s eyes are open! 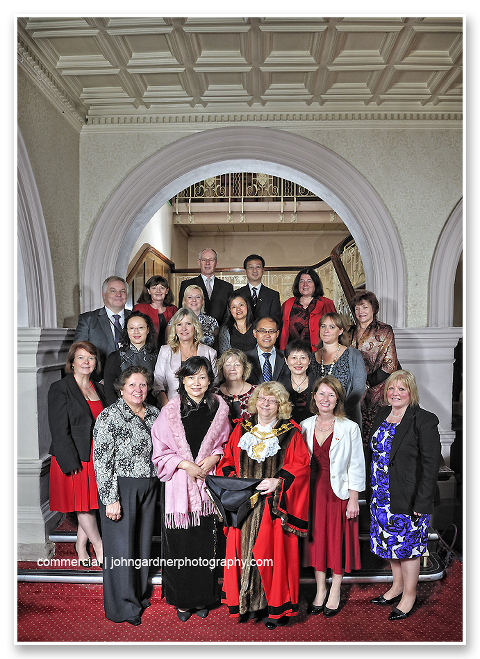