Phew! What a scorcher today when I met Paul and Louise for a pre-wedding meeting ahead of their wedding at Wentbridge House Hotel later this month, if it’s like this on the day it will be a hot one! We decided to meet at the Elsecarr Heritage Centre in the morning so that the couple could head straight off for lunch to celebrate Louise’s birthday – the centre is not far from their home and it is a place I’ve been meaning to scout for a location shoot for a while now, so it killed two birds with one stone. After a brief photo session around the old railway station at the back of the centre, we headed across the road to a nearby park to finish the shoot and to sit in the shade of the bandstand to go through the wedding schedule. Paul and Louise weren’t phased by the camera and we got some really cool shots from the session, using a small flashgun to overpower the sun and prevent squinting also helped with the saturation. I’m not a fan of strong sunlight, it’s always difficult to control especially with white wedding dresses and digital cameras which seem to be unable to handle highlights like film used to do. Paul plays in a heavy metal band so we had a brief chat about the merits of Pantera, Lamb of God, Insomnium and Kalmah (my two faves!) and it’s going to be a cool wedding if the first dance is to the sounds of “The Black Waltz”. If Winston, Wentbridge House’s resident DJ, has that in his iTunes collection I for one will be mightily impressed :¬) 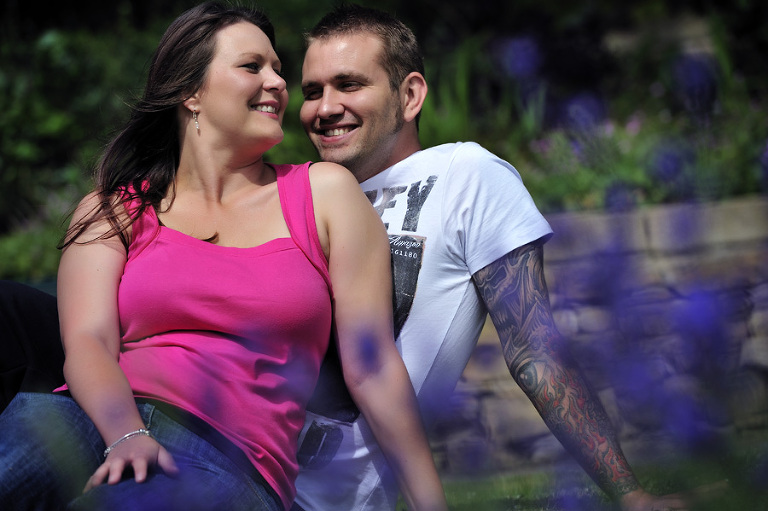