Had a long day in the studio today shooting the new web catalog for LoveSuspenders. Not nearly as glamourous as its sounds, it involved a lot of standing around while the garments were arranged perfectly and then I’d shoot to a given set of parameters so that there was consistency throughout the images. We shot everything on white backgrounds so that the images could be dropped onto background templates or have text dropped onto them. But then at the end of the shoot, I got to play and have some creative input as we shot the ‘impact’ images for the website. The impact images are more pictorial than the standard packshot or editorial image. I used the old cheval mirror and the boudoir wall to create a moody image that would show both front and rear of the garment in the same shot. 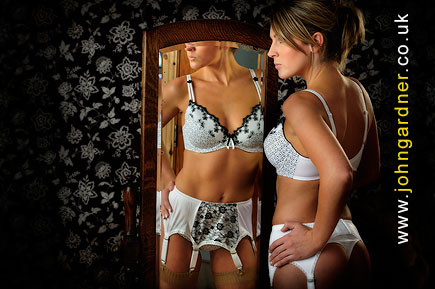