In Touch With Health – team award shoot at Pontefract Hospital

Every now and then a job comes along that is set to really test your metal as a photographer and today was one of those jobs. Everything went wrong! This was a short notice commission from In Touch With Health, an innovative communications and IT firm that work closely with NHS Trusts, and the brief was to shoot a team that have won an award within the industry. The problem was that the request for the shoot only came yesterday and due to mobile phone difficulties, traffic jams on motorways and just bad luck really, the confirmation phone call and instructions I should have had today never arrived. I couldn’t get through to their man and in the end I assumed that the job was off . Then came the call from the director of Pontefract hospital saying that I was expected after all at 14:00hrs. Holy Moly! It was now 14:20 – I said I could be there in 10 mins which was ok as the director from In Touch had failed to arrive due to traffic so I had chance get it in the bag after all.

A swift drive through Ackworth and down to the new hospital at Pontefract and I was there by 14:33 but couldn’t find the reception. No problem, I saw two hospital porters and asked them for directions but they were the only two porters who had no idea where reception was and they sent me way off course. Another phone call from the director and navigational assistance from a nurse and I was there – 150yards from where I’d asked the porters for directions! Its now 14:45, everyone had to go by 15:00 so there was no time for any fancy photography and all my ideas of power posing (them not me!) went out the window. Sheesh! Quickly stick a flash on a light stand with a radio trigger aiming it into a silver brolly because I’ve just found out my softbox attachment screw is lost, then realise in the dash from the house I haven’t brought the bad boy Sekonic flash meter, so its down whacking the camera into manual, checking the ambient and dropping it a stop before popping a test shot at 1/4 power from the flash, chimping the histogram, notch the flash up to 1/2 power and we’re away for the first shot outside the building. Only time for two or three shots before we move indoors into reception to shoot the team in the spacious and airy atrium. Couple of quick test shots here and then three or four actuals and job’s over! Team dispersing at 14:57 to go back to Pinderfields etc. The hospital cafe is right behind me and as I turn to pack up I see the two porters sat there having coffee and watching me work! Obviously I should have asked for the canteen not the reception!  Oh! And did I mention that one of the key guys was not there and needs to be ‘shopped in in post? :¬\ 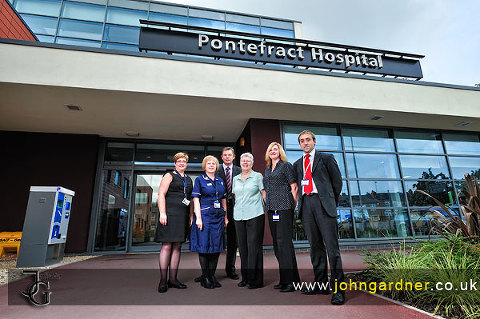 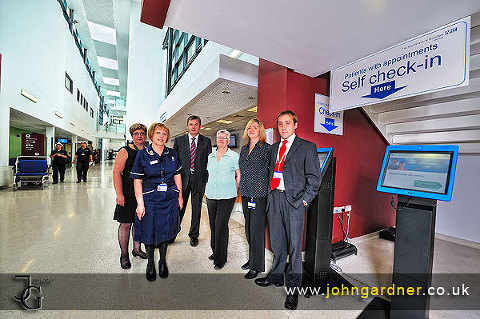