Sophie,  a young photography student came by the studio and as part of her photography degree, asked me to critique her portfolio. She’d chosen me because she liked the style of my boudoir images, the genre in which she wants to specialise. After critiquing the portfolio, Sophie was telling me of her up coming shoots, one of which involved shooting a model in the magnificent Castle Howard near York. She was only allowed 2hrs in the building before the public were admitted, so I suggested I came along to help her set up the lights and advise so that she could get the most out of her narrow time slot. As I’m a professional photographer, I was not allowed to shoot anything so that I could not make any commercial gain from the shoot, but I wasn’t looking to do that any way – my role was as advisor and voice activated light stand! Sophie decided to shoot in the style of La Chappelle – a famous photographer who shoots a particularly wacky style. The setting was ideal for what Sophie wanted and model Natasha was dressed in clothes of the Elizabethan period complete with wig and pale make-up. The idea was to make Natasha look more like a puppet than a person and I have to say it all went really well. Sophie got some great images and I took one to show how, by dragging the shutter, its possible to really balance the ambient with flash to get detail in the shadows, This shot was taken hand held at 1/10th second!

I have a workshop planned for early May in a superb location in Manchester where I will be demonstrating how to use flash and ambient to create some moody boudoir images. Contact me if you’d like details or keep your eye on the blog for details in the next week or so. There’s 8 places up for grabs and 7 have gone already! Don’t dispair though as there are several workshops planned for the summer :¬) 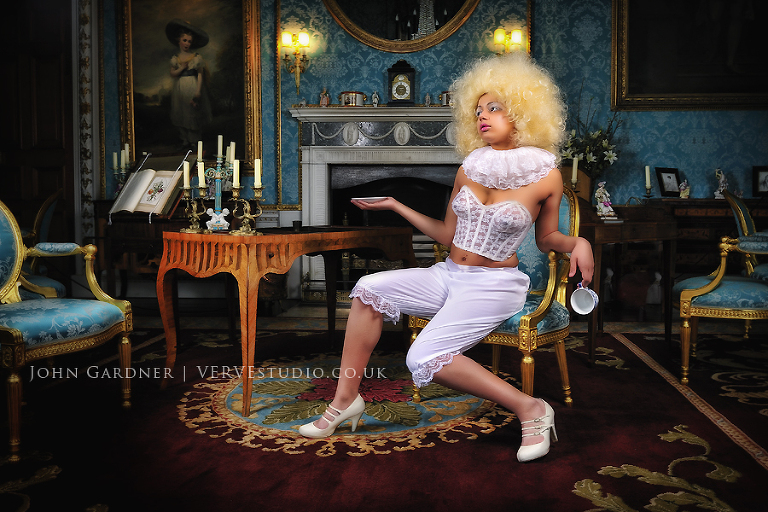