(….but harsh sunlight is only there when you don’t need it!)

Should have been on a small zodiac boat today with 4 mates doing some seabird photography in North Sea below the steep cliffs at Bempton, but unbelievably the trip was cancelled last minute by the skipper who feared strong easterly winds might give us some grief and push us onto the base of the cliffs. Not sure what the weather did actually do at Brid today but here in Wakefield it turned out a scorcher! The trip cancellation meant I was able to fulfil a commitment to fellow landscape photographer  Mike Hart  and shoot a traditional family portrait of him and his brothers at their mother and father’s diamond wedding anniversary.

After being beautiful soft, overcast cloudy light all day, the sun broke through at the worst moment and gave the most horrendous shooting conditions of very hot, bright high afternoon sun. Great for sunbathing and a cold beer but not for photography. The shot was to be taken at brother John’s house at Newmillerdam where they’d all gathered after a Sunday lunch out, but the garden was very open with not a single leaf for shade and, worst of all, the best vista meant Mike & co. would face straight into the sun! Standing on that square of turf under the high sun was like one of those gunfight scenes out of a spaghetti western! Putting the family facing into that so that I had sun over my shoulder would have given me the advantage as a shooter with good strong lighting on the family but loadsa squinters! Turning them against the sun prevents squinting but gives all sorts of shadow issues. Not one for the “natural light brigade” then. The only real choice was to put them against the sun and use a goodly dollop of off-camera flash to light them up. This should give me lots of nice smiley faces with no squinters and an added bonus of a rim light! The downside meant the house would be a backdrop, not good as it was too close, and also it would be in sharp focus because the only way I could sync the speedlights at 1/250 or under AND keep an exposure check on the scene was to have lots of DOF.

This is one of the shots that show just how strong the sunlight was – look at the shadows stretching out from the group despite my throwing 2 SB28 speedlights on half power back at them! The speedlights have just opened up the otherwise harsh black shadows, but in normal circumstances, those 2 speedies at that power would have thrown shadows of the group on the house wall behind! 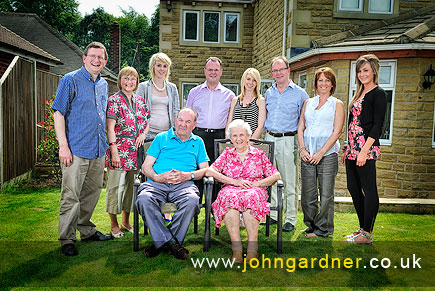 And yes, I know my SB800s would’ve sync’d to 1/4000 allowing me to open up for a shallower DOF, but the SU800 commander module in that sunlight?! Don’t get me started!