So, it’s only a few days since we last saw Katie & David at the pre-wedding meeting as you can see from the blog post below! As we left Wakefield and headed towards Blackpool, the overnight rain continued to fall and on the motorway, heavy rain and spray gave us the visibility of a London fog and reduced our speeds to around 40mph! Good job I had packed a couple of studio heads in anticipation of a wet weather wedding being shot entirely indoors! However! As we approached the end of the M55 on the way to Blackpool, the rain eased off, the skies opened up and the the roads appeared dry! By the time we got to the bride’s house, the sun was out and the skies were blue! I have no idea how it happened but the day remained like that with guests out in shirt sleeves sipping champagne cocktails on the lawns while we did the wedding photos! This was truly an international wedding with brothers, sisters, parents and guests coming in from America, Germany, Bali, Dubai and at least another dozen countries!

Katie got ready at her Aunt’s house before heading off to the church in an Aston Martin, while David and the best men got dressed at The Villa and then caught a vintage bus to church along with the guests. Although the timings went a little awry at the girls’ end, we did manage to catch the bus with the groom as planned, but only just. So, you can imagine my confusion when we arrived to get on the bus in a huge hurry only to find that David’s brother James is an identical twin, and I mean identical! I thought I was seeing double and Heather thought I’d gone nuts when I pointed out the guy she was photographing wasn’t the groom! Good job they had different coloured trousers on :¬o

The church service was really lively and fun with dancing in the aisles to the sound of the choir and loud cheers as they couple were hitched and the guests made a fabulous job of bubble blowing outside the church. We all boarded the bus back to Wrae Green and the The Villa where cocktails and beers were waiting for the guests but we did manage to halt the bus on the village green for a few quick shots on route. After the photos, the speeches were done and dusted and then it was onto the wedding breakfast and straight into the evening’s partying. Loads and loads of images I’d like to show, there’s 100 in the slideshow! Unfortunately, the iPhoney folks won’t get to see that but there are a few stills for those with Apple induced web censoring. 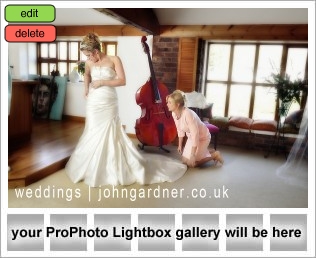