I had my first attempt at commercial car photography today when I was asked by Wakefield Audi to help them with their photography of used vehicles in their purpose built photography studio. Their problems stem from the fact that the photography area at the rear of Wakefield Audi showroom on Denby Dale Road, was designed without consulting a photographer. Consequently there are some major design flaws that mean the photo area, which is open fronted,  suffers from bright sunshine and big reflections which corrupt the images. Additionally, not being professional photographers, they were also having issues with specular highlights (hot spots on the car’s paintwork caused by the flashes) which they were unsure of how to remove.

They have a nice little set-up there with the cars on a custom built turntable so that they can be rotated and shot from all angles and built into the frame work are a series of Bowens studio flash which just happen to be the same style of units that I use in the studio. I met up with Craig, their man in charge of photographing the cars, and went through some basics showing him how to exclude daylight from the images by using low ISO, high shutter speeds and small apertures so that the whole light would be from the flash units. By eliminating daylight as much as possible, means we have control over the light coming from the flashes – in a nutshell, we get consistent lighting! Next we made changes to the flash layout to create a large, soft pool of light that would spread evenly over the set rather than firing the flashes directly at the car which was the current state. Once we’d made a few changes, we had a go at shooting a couple of cars.

This is the first time I have done any studio style car photography and while the results might not be up to Audi’s marketing standards, they are pretty impressive when compared to the other car dealers in the district who tend to just shoot the cars in the parking lot!  I am due to go again to have a final tweak of the lights and also work out how to further reduce some of the reflections. Here’ s a couple of cars from today. 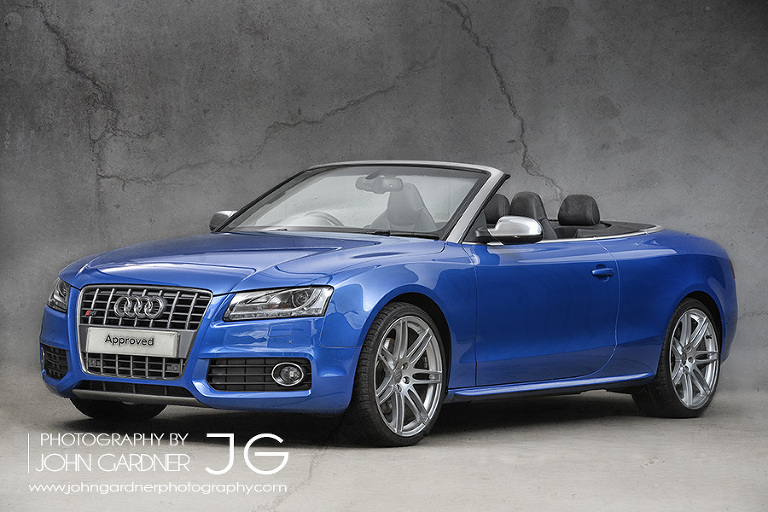